That’s the motto of Los Quinchos, one of the organizations that has long supported the dire needs of children in Nicaragua: Nunca mas un niño en la calle.

I last visited Managua in 2009 and shared the story of La Chureca. Even now, the acrid, burning smells and sights of ‘garbage living’ make me wince in memory. 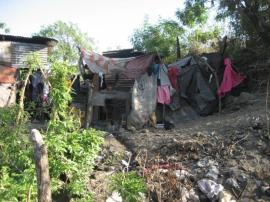 Imagine having to scavenge for your food through the loads dumped by meat trucks from nearby businesses: outdated meats from grocery stores, only food good enough for the dump.

Earlier this year, the Spanish aid agency AECID provided the funding to seal off the dump, establish a recycling plant and provide housing for some of the families. The city dump was renamed Bajos des Acahualinca.

It’s hard to believe the reports, and I long to go back and see the changes for myself, but according to ProNica:

“…the sea of shacks and families raking through trash has been replaced by a recycling plant; the once smoldering piles of trash have been compacted and covered with dirt. Only pieces of cement are left where the acres of trash once stood.”

The changes have brought about other needs, as Carlos Vida, International Coordinator for Los Quinchos, reports. Children are vulnerable; the drugs and violence and abuse have not disappeared, they have merely been moved along.

As with so many projects to provide a way out of poverty, it’s about a long-term commitment to empowering people through education.

Passionate about empowering women to live their lives with purpose, excellence, health and wellness! View all posts by Brenda Weidner

Thank you for visiting